Detroit was in the national spotlight during the Democratic presidential debates last week.

Detroit — the largest African American majority city in America — is home to a microcosm of systemic issues facing cities across the nation: Poverty, crime, struggling educational systems, a lack of affordable housing and long-term disinvestment, to name a few.

Yet, it and other cities like it, were tossed on a back burner while candidates traded barbs and debated at length the minutia of each other’s health care proposals.

Detroit has historically been home to a loyal bloc of Democratic voters, but the 20 candidates that graced the historic Fox Theatre stage failed to connect and missed a rare opportunity to earn trust, according to Monica Lewis-Patrick, a longtime Detroit human rights advocate.

Aside from sweeping generalizations about the city’s recovery and auto industry, candidates were relatively mum on key issues, Lewis-Patrick said.

“It wasn’t just about the city but it was about what the city represents … what’s playing out around the Great Lakes and across the nation,” said Lewis-Patrick, who is also the cofounder of We the People Detroit, a grassroots organization focused on ending water shutoffs in Detroit. “You’re sitting and standing in Detroit, which is the epicenter of massive foreclosures, massive water shutoffs, failed public education, the privatization of public education – so many things that were supposedly part of the Democratic party’s agenda. I didn’t hear them speak to their values.” 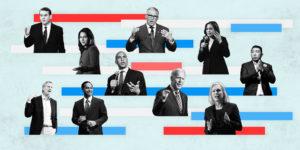 Mothering Justice is a Detroit based grassroots organization focused on empowering mothers. The organization hosted a watch party during the debates of about 40 black millennial mothers.

“I think folks are looking for radical honesty,” Powell said. “I feel like the person who’s going to get people motivated and mobilize has to have some honest statements of addressing the root of these issues. The next president of the United States needs to be wiling to revolutionize the way the system has been set up for all these years. No one on that stage gave me hope and that’s a problem.”

Detroit is no longer the nation’s most violent city since dropping to number two last year, but crime remains at the forefront. Detroit ranks behind St. Louis, according to FBI crime data.

Gun violence surfaced briefly during the first debate but it was absent altogether from the second debate. The first debate discussion centered mainly on stopping the “epidemic of gun violence,” that has caused mass shootings across the nation. Less than a week after the debates, two separate mass shootings within 24 hours of each other– one in El Paso, Texas and the other in Dayton, Ohio — left at least 29 people dead.

Mass shootings deserve to be a topic of discussion but the amount of crime facing cities like Detroit and Chicago should also be at the forefront, some grassroots activists and residents argue.

Despite economic resurgence seen in parts of Detroit, crime remains a significant concern for many Detroiters. In 2018, about 755 nonfatal shootings were reported.

“In Detroit, it (crime) happens everywhere,” said Chris White, a political consultant and member of the Detroit Coalition Against Police Brutality. “You have cries of helplessness. The things that happen in a lot of the urban areas, we’re trying to act like it’s not really occurring. Our leaders aren’t really demanding the solutions that we need, even with presidential candidates coming into a place like Detroit.”

White says the lack of robust conversations around gun violence facing inner cities is indicative of a lack of outreach being performed by candidates and their staff.

“I think that’s a major problem when it comes to campaigns that don’t understand what African Americans and people in urban areas go through,” White said. “I think we’re looking for someone that can address and use the federal government to deal with issues of crime, education. We mainly need to hear how what you’re doing to deal with inequality and that’s a major issue with Detroit being a center of poverty.”

While Detroit saw a nearly six% boost in its median household income to $30,344 in 2017, the city’s poverty rate still rests at 34.5%. Almost half – 48% — of all Detroit children are living in poverty and residents say much more needs to be done.

“I do wish they talked about the causes of poverty in a more adept way,” said Eric Thomas, a Detroit resident and senior partner at the Detroit-based marketing firm Saga MKTG. “There was so much screaming about Trump that we didn’t get an opportunity to talk about what we are going to do about poverty. What are we going to do about social safety nets? The only social safety nets aren’t jobs and healthcare.”

Thomas said he believes Detroit is an example of what happens when “systemic racism congeals itself” into a city.

“I think it has a lot to do with the fact that we are the largest, especially percentage wise, African American city in America,” Thomas said. “So when you have a confluence of state intervention and a disconnect from resources and access and all those sorts of things, then you do see what could possibly happen all over the world.”

At the height of the mortgage meltdown in 2007, 5% of Detroit’s homes were repossessed — the highest rate in the nation, the Free Press reported.

Donna Givens, the president and chief executive officer of the Eastside Community Network, who has witnessed firsthand the collapse of the housing industry in Detroit, said housing is one of the most critical issues facing the country at this moment.

“We have a housing crisis that impacted the entire nation,” Givens said. “On a debate stage, we want people to talk about what’s happening in Detroit but also understand that housing has emerged as a national, universal crisis.”

It was reported in March that white people account for just 10% of Detroit’s population but received nearly half of the home mortgage loans made in 2017 for which the race of the applicant was known. Of the 1,072 mortgage loans made in Detroit in 2017, the most recent year for which full data are available, 442 went to white borrowers, 461 to black borrowers, and in the remainder the race of the applicant was not known, or, in a few cases, went to Asians or those of other ethnic groups.

Water shutoffs have long been a divisive issue in Detroit. They made international headlines in 2014 when tens of thousands of shutoffs began, catching the attention of United Nations officials. At its height, 50,000 people were at risk for shutoffs and 44,000 actually had their services suspended.

Detroit Water and Sewerage Department officials told news outlets earlier this year that about 5,600 people were at risk for shutoffs this year, compared to more than 17,000 last year, and 28,000 in 2016.

But Lewis- Patrick said the shutoffs remain a crisis in the city and she hoped candidates would have highlighted the need for water affordability and improved infrastructure.

“It’s one of the few things that I believe could put American people back to work all across this nation, regardless of whether you’re in a small community or urban center,” she said. “So I was extremely disappointed by that and felt like it was a lost opportunity to really talk to the American people as opposed to the political pundits and pollsters.”

Mothering Justice Founding Director Danielle Atkinson said during this election cycle, she’ll be looking for a candidate who has a general vision for everyone but can speak to all of these issues and those that impact black mothers specifically.

Yet, the lack of discussion around issues facing African American and minority communities is emblematic of a larger issue within the political spectrum, Thomas said.