With just over three weeks left to get a budget deal, Michigan’s leaders should scrap hopes for a grand bargain that would fix the state’s roads for good and focus instead on what’s actually possible.

Gov. Gretchen Whitmer’s $2.5 billion roads/education funding plan is not going to pass. But there’s still a chance for an incremental funding package that would allow her to check off a campaign promise to “fix the damn roads” without subjecting lawmakers to the wrath of voters. 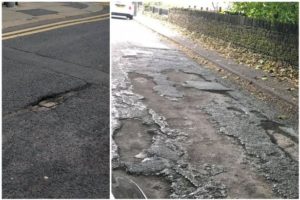 The starting point for a deal with Republicans is getting rid of the 6-cent sales tax on motor fuel — a double tax that raises money for schools and other General Fund spending, but not roadwork.

Replacing it would require a 19-cent fuel tax hike, but that wouldn’t add the additional funds Whitmer wants to make Michigan’s roads passable.

Senate Majority Leader Mike Shirkey, R-Clarklake, and his Democratic counterpart Sen. Jim Ananich of Flint are said to be creeping toward a compromise on raising revenue.

Talks in the Republican-controlled House are not progressing as well. House Speaker Lee Chatfield, R-Levering, and Democratic leader Christine Greig of Farmington don’t get along as well as Shirkey and Ananich. And the Democratic caucus has preoccupied itself with a laundry list of tax and spending hikes — including raising unemployment benefits and switching to a graduated income tax — that distract from the immediate work of fixing the roads.

To move the negotiations off the dime, the two chambers should not negotiate in tandem. Instead, the governor should strike the strongest possible bargain with the Senate, and then use that deal to pressure the House into coming along

To make an impact, a package should raise at least $1 billion to $1.5 billion in additional road funds through a combination of methods, including hiking fuel taxes above what’s needed to replace the sales tax.

Added to the $1.2 billion in new road funds the Legislature has already approved since 2015, it would be enough to make a huge impact on the condition of streets and highways.

And it’s not that far off from what Whitmer wanted for roads. Her $2.5 billion plan actually includes $1.9 billion for roadwork; the other $600 million would go to schools. Education funding should be taken up separately.

The Citizens Research Council of Michigan offered up some ideas on alternative road funding options that could help break the impasse.

Most promising is a plan to allow local communities to raise their own resources for roadwork through income, sales, vehicle registration and gas taxes. Voters would have to approve the new levies, but they may be more agreeable to okaying taxes they know will stay at home to fix their own streets.

Both Republicans and Democrats are raising the possibility of passing a budget that doesn’t include road funding to meet the Oct. 1 deadline.

That would be a mistake. Without the deadline pressure, the wrangling could go on for months and make it more likely a raft of tax hike proposals will work their way onto the 2020 ballot.