Rapturous crowds filled the streets of Sudan’s capital, Khartoum, after generals and protest leaders signed a landmark power-sharing deal paving the way for civilian rule after months of deadly protests.

Thousands of cheering people gathered on Saturday around the Friendship Hall next to the Nile, where the documents that will govern the country’s 39-month transition were signed.

Many had arrived on trains from Sudan’s provinces to take part in the celebrations, which lasted deep into the night, with people of all ages spilling out of honking cars cruising up and down the main road that runs along the Nile and other parts of Khartoum.

“This is the biggest celebration I have ever seen in my country. We have a new Sudan,” Saba Mohammed told AFP news agency while waving a small plastic flag.

One of Sudan’s top generals, Mohamed Hamdan Dagalo, who is deputy head of the Transitional Military Council (TMC), and Ahmad al-Rabie, representing the Alliance for Freedom and Change protest umbrella group had initialed the agreement on August 4 and were the main signatories on Saturday. 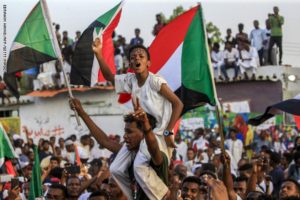 “I invite everyone to make this day a new stage of getting over the bitterness of the past and looking towards the future,” Lieutenant General Abdel Fattah al-Burhan, head of the military council, said at the end of the ceremony.

The constitutional declaration formalizes the creation of a transitional administration that will be guided by an 11-member sovereign council, comprised of six civilians and five military figures.

The agreement brought an end to nearly eight months of upheaval that saw masses mobilize against former President Omar al-Bashir.

‘Next step is justice’

The TMC has ruled Sudan since April when the military deposed al-Bashir following months of protests against his rule during which dozens of demonstrators were killed.

The TMC and the main opposition alliance, the Forces of Freedom and Change (FFC), have been negotiating the power-sharing deal since then, but continued unrest, during which more protesters were killed, delayed an agreement.

Brokered by the African Union (AU) and Ethiopia, the agreement creates a joint military and civilian sovereign council to rule for little over three years until elections can be held.

Under the agreement, a military leader would head the 11-member council for the first 21 months, followed by a civilian leader for the next 18. It would also establish a cabinet appointed by the activists and a legislative body.

“The signing of the agreement on Saturday may be a landmark on the road to civilian rule, but many Sudanese say it’s not the end of the revolution.”

“They say their struggle will have succeeded only when the military hands over power and accountability begins,” she added.

More than 250 deaths have been recorded since the start of the protests in December, with at least 120 killed in June when the military raided the pro-democracy sit-in at the army headquarters, which had become the symbol of the revolution. 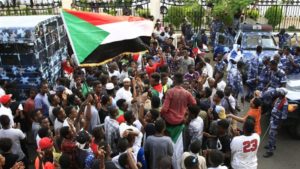 “The next step we’re waiting for is justice for the blood of the martyrs,” said Mohammed Hassan.

“Before power is handed to civilians and before the economy improves, justice for those who sacrificed their lives so that the whole country can be happy like they haven’t been for the past 30 years,” he told Al Jazeera.

Wala Hassan, another protester, said she doesn’t expect the road ahead to be easy.

“The things people lost their lives for, the demands must be met. It’s a first step and that’s what what we’re celebrating, not the end of our revolution,” she said.

Muslim pilgrims pray in Mecca as hajj winds down without incident