Two political outsiders have won the largest share of votes in Tunisia’s presidential election, delivering a massive blow to the country’s political establishment. Kais Saied – a 61-year-old law professor nicknamed “Robocop” due to his monotone voice and speaking style – and Nabil Karoui, a media tycoon currently behind bars, won a respective 18.4 percent and 15.5 percent of the votes, with the final results released by the electoral commission ISIE on Tuesday. Ennahda candidate Abdelfattah Mourou and former Defence Minister Abdelkarim Zbidi came in third and fourth, while Prime Minister Yousef Chahed turned out to be the election’s biggest loser, coming in fifth out of 26 candidates in the running. Both leading candidates will now square-off in a second and final round, either on 29 September, 6 October or 13 October. Arabic language newspaper Ash-Shurouq described their victories as a “political earthquake”, while French daily Le Temps referred to it as “the slap”. Speaking to reporters at his campaign offices late on Monday, Saied said Tunisians had “carried out a revolution within a legal framework”. “They want something new … new political thinking,” he said. A political neophyte, Saied had shunned political parties and mass rallies ahead of the vote, instead opting to go door-to-door to explain his policies. The simplicity of his campaign may also have strengthened his credentials as a crusader against corruption, which many Tunisians believe has bedeviled their transition to democracy since the ouster of longtime autocrat Zine El Abidine Ben Ali in 2011 after mass protests. “Saied has a certain appeal, especially to disillusioned youth who believe the revolution was hijacked by corrupt political parties,” Sharan Grewal, a research fellow at the Brookings Institution. “Saied offers them a very technical but structural reform: decentralization of power, empowering the people to check the elite.” The election followed an intense campaign characterized more by personality clashes than political differences. Karoui, who had also been a favorite, watched on from prison. He faces charges of tax evasion and money laundering, which his party says are politically motivated. Depicted as Tunisia’s equivalent of Silvio Berlusconi, the political newcomer built his appeal by using his Nessma TV channel to launch charity campaigns, during which he handed out food and medical aid to some of the country’s poorest people. “I’m ecstatic that Karoui is through to the second round,” said Layla Mansour, a cashier in the capital’s affluent Sidi Bou Said neighborhood. “Both he [Karoui] and Saied are men of the people. They have our best interests at heart. I’m confident that they will improve our situation.” Tunisia has secured its democratic advances more than any other country affected by the Arab Spring uprisings, but the elections come against a backdrop of serious social and economic challenges. Beyond the relative affluence of the Tunisian capital and some coastal cities, entrenched poverty is a part of life for many. Unemployment has risen from 12 percent before the uprising to 15 percent now and distrust of the political establishment is running high. ISIE described voter turnout as “acceptable”, but in a sign of apathy, only 45 percent of registered voters took part when compared to 64 percent in 2014. 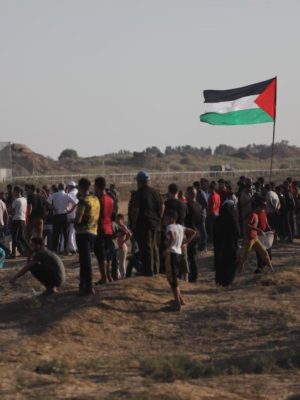