ortland, Oregon is bracing for a storm of far-right violence. In July, Joe Biggs, a former staffer at the far-right conspiracist site Infowars announced an “End Domestic Terrorism” rally in Portland this Saturday. Its aim: the local antifa movement.

Biggs, who’s encouraged date rape and punching transgender people, told followers on Twitter to bring guns, declared “DEATH TO ANTIFA!!!!!!”, displayed a spiked weapon saying that it “will be put to good use,” and posted memes about death squads murdering leftists before his account was suspended.

The “End Antifa” rally organizers include Enrique Tarrio, chair of the violence-prone Proud Boys, which is designated as a general hate group by the Southern Poverty Law Center, and “Rufio Panman,” the alias of Ethan Nordean, a brawny street fighter whose knockout punch of an antifascist in Portland in June 2018 was used as a recruiting tool for the Proud Boys.

This week’s rally was called after right-wing media personality and provocateur Andy Ngo was attacked in Portland on June 29 while filming a Patriot Prayer rally heavily outnumbered by antifa. A video shows him being punched, kicked, and hit with coconut milkshakes and silly string by masked individuals.

Since then, social media has erupted with dozens of graphic, deadly, and specific threats from the far right to “shoot to kill antifa.” A gun scope was superimposed over a photo of two Portland activists with the words “End Domestic Terrorist’s.” In another image, a knife-wielding hand bloodily slashes the throat of an individual labeled “Rose City Antifa,” one of the oldest antifascist organizations in the country.

Portland has joined Berkeley, New York, Charlottesville, and Seattle as liberal cities that have become flash points for far-right violence since Donald Trump took office in 2017. But Portland is unique in that the far right has turned the city into a regular battleground.

Why Portland? The city presents a unique mix of past and present white nationalism; policing that enables the far right; weak political leaders; and a legacy of antifascist organizing. Combined, these elements allow the far right to stage violent spectacles with few legal consequences against their ideological enemies — antifa, liberals, so-called PC culture, cities — while using social media to glorify the violence as a recruiting tool and proof of their racial and masculine virility.

It starts with Oregon’s history. The state was envisioned as a white utopia and barred black people from residency until 1926. To this day, Portland is the whitest big city in America, with a population that is 77 percent white and less then 6 percent black, and that racial homogeneity has proved for decades to be fertile recruiting ground for racist hate groups. 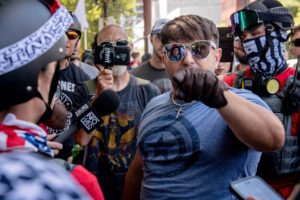 Joseph Lowndes, associate professor of political science at University of Oregon and co-author of “Producers, Parasites, Producers: Race and the New Right-Wing Politics of Precarity,” said that “in the 1980s, for groups like Tom Metzger’s White Aryan Resistance, Portland was a choice spot for their ‘10 percent strategy.’ That meant if the city was 10 percent or less people of color, the far right could organize working-class whites there as they believed they wouldn’t meet much resistance.”

Oregon currently has a disproportionate number of hate groups and militias, while in the broader Pacific Northwest, many far-right groups participated in and were energized by the Bundy family’s armed takeover of the Malheur National Wildlife Refuge in eastern Oregon in early 2016.
Speaking of the massive brawls in Portland, Lowndes said, “There is another legacy of the anti-authoritarian left, anarchists, and anti-fascists who also since the 1980s have been a militant street-oriented left.”

That’s where the police come in. As the far right has turned Portland into a battleground nearly a dozen times since 2017, local journalists have revealed how police affinity for the far right has enabled its violence.

Internal documents obtained by the Willamette Week, Portland Mercury, and The Guardian reveal that Portland police see the far right as “much more mainstream” than the left. Text messages between a police lieutenant and Patriot Prayer leader Joey Gibson, who’s been hit with felony riot charges, show that the police fed him real-time information about the movements of antifa during street skirmishes, and gave him advice on how his most notorious brawler, Tusitala “Tiny” Toese, could avoid being arrested on two separate occasions. In June 2017, when The Intercept asked the police about Toese, a spokesperson claimed that they didn’t know who he was and said their real concern was about the actions of antifascist counterprotesters.

There’s more. Portland police launched a criminal investigation against an activist based on material provided by Gibson. And during an extremist rally on August 4, 2018, police discovered Patriot Prayer members with loaded guns on a garage rooftop directly overlooking the protest. The police let them go and didn’t inform anyone for two months, including Mayor Ted Wheeler, who serves as police commissioner. In the Portland metro area, there are cops who are Islamophobes, an Immigration and Customs Enforcement private prison that employed a Proud Boy, and a sheriff’s deputy affiliated with the Proud Boys as well. All of which fits a national pattern of white supremacists infiltrating law enforcement.

When it comes to left-wing protests, the bias comes into sharp focus. On June 4, 2017, police unleashed less lethal weapons on leftists, illegally kettled nearly 400 people, recorded their IDs, and retained the information despite assurances that they wouldn’t. The American Civil Liberties Union of Oregon said of the incident, “No other police force in America uses crowd control weapons with the regularity of the Portland Police Bureau.”

Just over a year later, on August 4, 2018, the police launched an unprovoked assault against peaceful protesters, nearly killing one when a flashbang grenade punctured his helmet, resulting in a brain hemorrhage.  And on May 1 this year, 20 Patriot Prayer members led by Gibson and accompanied by Ngo attacked antifascists at a bar, fracturing the vertebrae of one woman (whose name was released by Ngo, leading to threats of violence against her, according to her friends). The bar owner claimed that it took police an hour to respond despite numerous emergency calls. The police released a lengthy statement seeking to justify why they didn’t respond until after the fight had ended despite knowledge of the attack as it was happening.

After Ngo was attacked in June, the Portland police tweeted out disinformation that coconut milkshakes being handed out by antifascists were laced with concrete. Conspiracists like Jack Posobiec helped the tweet go viral; it was turned into fact by right-wing media, treated as credible by mainstream media, and incited angry right-wingers to deluge antifascists with death threats. Days later, Portland City Hall was evacuated after a bomb threat, possibly related to the incident.

Police bias against the left is nothing unusual in America. The difference is that Portland lacks a counterbalance. Following the June 4, 2017, rally, someone who worked closely with Wheeler told me, “The mayor’s office is scared of the police.” The source explained that inside the police control center that day, police said not to interfere with tactics even when members of the mayor’s staff said “that looks like excessive use of force.”

“There’s fear inside of the mayor’s office [that] if they pushed on the police, there would be a police slowdown or strike,” the source said. “Within the police department, there are institutional biases toward Patriot Prayer and white supremacy.”

Eileen Park, a spokesperson for the mayor’s office, said, “Those allegations are false. The Mayor’s Office has always respected and supported the work done by the members of the Portland Police Bureau,” adding that “they are true professionals and can always be relied upon to do the right thing to protect our city.”

Contrast this with New York City. When 10 Proud Boys assaulted antifascists in Manhattan last October, police “stood by doing nothing,” according to the New York Times, and failed to arrest any of them. But in a city that is majority minority and home to more than 3 million immigrants, politicians were swift to blast the police inaction, forcing the New York Police Department to start identifying suspects and making arrests.

In Portland, however, political cowardice is the rule. Evidence indicates that the Multnomah County District Attorney, which has jurisdiction over Portland, has been as lax in prosecuting far-right lawbreakers as police have been in arresting them. It’s not because the office doesn’t know who they are: Antifacist researchers in Portland have identified dozens of right-wing extremists who instigated and participated in streets fights on June 30, 2018, including Tarrio, the current Proud Boys leader. More than a year later, not one of those identified has been arrested in conjunction with that rally. And Tarrio appears so unconcerned about arrest that he is listed as a leader of Saturday’s rally.

“The mayor’s office is scared of the police.”

Media coverage hasn’t helped. Other than the alternative weeklies and The Guardian, reporting on the far right has been “both-sidesism” at best and cringeworthy at worst. The editorial board of The Oregonian, the main daily newspaper, has castigated anarchists as “punk fascists” over relatively minor property damage (revealing that no one there apparently knows the history or definition of fascism), while allowing one of its columnists to act as a useful idiot for Gibson by calling him a “modern-day prophet” preaching “love” and “unity.”

Lowndes said the problem of silence about the far right is pervasive in the state. “There has been nothing coming from the legislature, the governor’s office, congressional representatives,” he said. “It’s a white political culture that has a high tolerance for far-right and white nationalist organizing, and seems reluctant to address it for fear of alienating conservative voters.”

If violence is averted in Portland, it may be because of the white nationalist who allegedly massacred 22 people in an anti-Hispanic rampage in El Paso earlier this month. That appears to have motivated the FBI to visit Biggs, who then reportedly said that “he wants a peaceful demonstration and has told his followers to keep their weapons at home.”

Days after the El Paso shooting, police began arresting Gibson and five members of his band for attacking antifascists at a bar in May, despite the fact that their faces and actions had been public for more than three months. This week, the leader of the Oath Keepers announced that his Northwest militia was quitting the rally, citing as one reason the work of antifascist researchers compiling violent threats.

Kristian Williams, author of “Our Enemies in Blue: Police and Power in America,” said, “If this crackdown is in response to El Paso, this fits a pattern of police giving latitude to right-wing violence until a threshold is crossed. The violence is allowed to go on much longer and cause much greater damage than would ever be allowed on the left.”