Francisco Erwin Galicia, the 18-year-old Dallas-born U.S. citizen detained by border officials, is speaking out about the conditions inside the facility where he was wrongfully held for more than three week. Galicia said conditions were so bad, he considered self-deporting just to get out — even though he has a birth certificate proving he’s American-born.

During the 23 days he was in the custody of U.S. Customs and Border Patrol, Galicia was not allowed to shower, he told The Dallas Morning News, which first reported his story.

The teen said he lost 26 pounds during his time in the immigrant detention center, and said officers didn’t provide him with enough food. He was crammed into an overcrowded holding area with 60 other men. They slept on the floor with aluminum-foil blankets — some even had to sleep in the bathroom area, he said.

Some of the men were very sick and were bitten by ticks, but were afraid to ask for a doctor because CBP officers told them their stay would start over if they did, Galicia said.

“It was inhumane how they treated us. It got to the point where I was ready to sign a deportation paper just to not be suffering there anymore. I just needed to get out of there,” he told the newspaper. “It’s one thing to see these conditions on TV and in the news. It’s another to go through them.”

Galicia’s brother Marlon, who was born in Mexico and is not a U.S. citizen, decided to agree to deportation after two days in the facility.

The brothers were not allowed to make phone calls while being detained. Marlon was deported to Mexico, but Galicia stayed until he was moved into ICE custody, where he was finally allowed to call his mother.

His lawyer, Claudia Galan, brought necessary documentation, including his birth certificate, to border officials, but they continued to hold him. She told the newspaper it appears he was detained due to conflicting information on a visa his mother had used for him as a child. Finally, on Tuesday, Galan announced Galicia had been released. 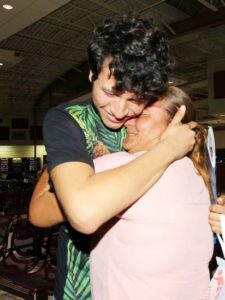 U.S. citizen Francisco Galicia was detained by border officials for 23 days. During that time he did not shower, and he lost 26 pounds because he was not provided with adequate food, he said.  KIN MAN HUI / AP